Julian Assange, founder and commander in chief of Wikileaks, appears to have replaced Iran, al Qaeda, the Taliban, and the rest of the world’s wily evildoers as the number-one threat to U.S. security.  In fact, we seem to be at war with Assange and his network of allies, a network that seems to be growing faster than the roster terrorists we’re creating with our ham-fisted war on terrorism.
According to the Pentarchy-pliant New York Times, we’re witnessing the start of a “cyberwar” against “hundreds of Internet activists” who have “mounted retaliatory attacks” on Web sites that they deem “hostile” to Wikileaks and Assange.  From the sound and fury the war mongrels are channeling through the media, you’d think Assange had supplanted Osama bin Laden as American’s most-wanted boogey man.
The national security noise generators would have us think that the only real difference between Assange and bin Laden is that we have Assange in custody.  Well, our British lapdogs have him in custody.  If you could call Assange’s arrest a capture.  He turned himself in.  But you can safely bet a shiny decimal tuppence that half of Scotland Yard put itself in for the George Cross the second Assange walked through the front door of his local bobby shop.
According to the U.K.’s Guardian, British District Judge Howard Riddle refused Assange bail on the grounds that he “might fail to surrender.”  Um.  Riddle me this, Judge: why are you worried Assange won’t surrender when he just, like, did?
Assange’s incarceration supposedly has nothing to do with Wikileaks’ recent dump of embarrassing State Department documents.  It’s all about a Swedish warrant for his arrest on charges by two women of sexual misconduct.  One might wonder how any sort of sexual behavior could be viewed as “misconduct” in Sweden, but fortunately we have Swedish attorney Gemma Lindfield, an “experienced extradition practicioner,” to explain things for us.
The first complainant, “Miss A,” accused Assange of “using his body weight to hold her down in a sexual manner.”  I hadn’t heard that Sweden outlawed the missionary position, but I guess the Swedes can’t have it getting out that anyone in their country is having plain old vanilla envelope sex. .
Miss A also alleges that Assange "sexually molested" her without a condom when it was her "express wish" one should be used.  How often does something like that happen in Sweden?  Just about never, huh?  Wouldn’t that be your guess?  And I bet when something like that does happen, the Swedish Bikini Team threatens to go on strike until the Swedish justice system sets things right.
Miss A also charged that Assange “deliberately molested” her "in a way designed to violate her sexual integrity."  Jesus in a hoop skirt.  This is starting to remind me of a joke I heard in the Navy about the blind Buddhist monk the Siamese geishas.  It sounds to me like Miss A got her watertight integrity violated and she’s mad as a herd of homeless hornets because she’d been saving it for Mr. Right.
The other complainant, “Miss W,” charges that Assange had sex with her without wearing a condom while she was asleep at her Stockholm home.  Hm.  Now, if she was asleep, how did she know…  And how did Assange get into her Stockholm home while she was asleep if he didn’t have his own…

And hey, do you suppose Miss A and Miss W filed charges against Assange before or after they found out about each other? 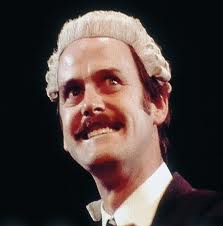 Oh, never mind.  I shouldn’t make light of this.  Judge Riddle says these are “serious allegations.”  I guess he’s never heard of this kind of behavior happening in England.  It’s probably never come before his bench in all the time he’s been sleeping on it.
Assange told City of Westminster magistrates that he intends to fight extradition to Sweden, setting the stage for what promises to be a long legal battle.  Maybe long enough for some Pentagon or Justice Department legal beagle to cook up something of substance to charge Assange with.  Every high-profile war mongrel in Congress and the executive branch is howling about how Assange’s release of thousands of “classified” documents “jeopardizes U.S. national security.”  But the truth is that nothing Assange has revealed or ever will reveal could violate the integrity of our national security the way our government’s senior leadership has ravaged it.
Assange didn’t cook the intelligence on Iraq like Big Dick Cheney and His Beltway Destroyers did, and Assange didn’t funnel pro-war propaganda into the public ear the way the New York Times did, and he didn’t stand in front of the United Nations with cameras rolling and present “hard” intelligence on Saddam Hussein’s weapons of mass destruction that he knew damn good and well was used dog lunch the way Colin Powell did.  Assange didn’t sucker us into going along with extending the war in Iraq the way David Petraeus did, and he didn’t roll over like a slut-puppy for his generals and escalate the unwinnable war in Afghanistan the way Barack Obama did.

The people putting our troops in danger are the same yahooligans who are crying a river of crocodile tears because they look like fools in the Wiki-leaked documents Assange released.  Our Secretary of State Hillary Clinton (aka Suzy Strident) says Assange’s leaks are an “attack of U.S. foreign policy interests,” yet few people in the history of our country have done more harm to our foreign policy interests than Hillary.  Hillary makes Condi Rice seem marginally competent in comparison, and to make Condi seem even that good, man, you have to totally suck to the point where it’s unfathomable how bad you totally suck.
Twenty years ago, or maybe even ten, whoever is feeding Assange his material would have taken it to the New York Times or the Washington Post.  Alas, those outlets, as well as the vast majority of the rest of our “pink” press, have taken a nose dive on the job and they’ll never get back up.
So here’s to the information warriors who have engaged in cyber-combat with Amazon and the credit card companies and the rest of the deep-pocketed slobs who have used their clout to try to stifle the closest remaining thing we have to a fourth estate.
What a shame that the only journalistic watchdog America has left resides in stodgy old sexually repressed Sweden.

THIS JUST IN: HE'S FREE!
Commander Jeff Huber, U.S. Navy (Retired) is the author of the critically applauded novel Bathtub Admirals, a satire on America’s rise to global dominance.
at 5:29 PM